Enable resellers to have a domain in cPanel on top of WebHost Manager access. WHM software automates your business; that saves you time and money. It also provides easy-to-use features that website owners love.

Decentralizing the Web with IPFS

Home/Technology/Decentralizing the Web with IPFS
Previous Next
Decentralizing the Web with IPFS
I’m sure you are well aware of the basic architecture on which the ‘World Wide Web’ functions. Invented by Tim Berners-Lee in the CERN Laboratories in Geneva, the Hyper Text Transfer Protocol(HTTP) is the foundation of the Web and HTML. Before the introduction of HTTP, publishing content on the web was an expensive affair. HTTP managed to drop the publishing cost significantly and liquefy information distribution making things not only convenient but also accessible. I’m sure you could not imagine the world without HTTP and neither can I. There always seems to be enough room for groundbreaking ideas and inventions, and the Inter-Planetary File System(IPFS) is one of them.

What is the IPFS?

The Inter-Planetary File System or IPFS as they call it is a peer-to-peer hypermedia protocol. I’m pretty sure you are an avid user of peer-to-peer file sharing clients such as BitTorrent, µ-Torrent or Vuze. To make things sound simple, IPFS pretty much functions the same way. Think of it as a single BitTorrent swarm exchanging and sharing data through multiple computers storing the same file.

Juan Benet, the founder of Protocol Labs, propels the IPFS project forward with the intent of replacing protocols like the HTTP that have been a part of our lives for so many years.

Why was it necessary and what makes it so unique?

The intent of the Web was to be a decentralized structure but, HTTP encourages hyper-centralization. This is because HTTP sends/receives transfer requests through/from a single connected device at a time and searches for a file based on its location. Juan states, “I think that it’s time to think about the protocol of the web as not this thing where you fetch a specific file from a specific place, but right over you fetch a specific file, and that anyone should be able to serve that file to you.” Here are a few distinguishable features that you can have a look at: 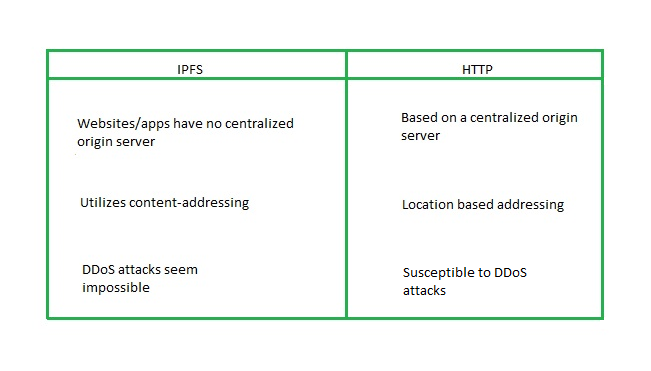 The main aspect of the IPFS is a decentralized distribution of information that aims to make the Web faster, smarter, safer and more open.

A World without HTTP?

The peer-to-peer concept has been around for a while, but Juan truly believes that IPFS truly could replace HTTP. Here are a few examples of the p2p based platforms that have evolved in parallel with the IPFS:

Conceptually, the IPFS is a force to be reckoned with. You could say it is a revolutionary attempt to solve  the problem of HTTP being too dependent on the internet backbone. Operationally though, it has to be groundbreaking to replace HTTP because our whole infrastructure is dependent on it.

As explained in the above paragraph, it is an interesting concept but it is only used by a fringe minority. IPFS is still not that prominent to the tech folk in the Valley. Until its adoption peaks, there really is no urgency to make any changes. Change is change now, and we are ever ready to welcome it. So keeping an eye on emerging technologies goes without saying. If and when the basic protocol of the web changes, the entire architecture like routing, hosting, data transfer and internet security will undergo radical changes and we at Artyvision would like to see ourselves as the vanguard of it all. Feel free to express your enthusiasm on the same, I’m sure the IPFS has got you to put your thinking cap on.

To help create a world where people can develop to meet their aspirations without being restrained by the limits of their knowledge of technology, or ability to acquire the right technology, now, or in the future.

To continuously develop knowledge, advice and products to enable customers to meet their needs and aspirations, now and in the future.

We feel that if we better understand how you operate, then we can deliver higher levels of service, support and consultancy to you and your organisation.

Our services are differentiated by the flexibility we offer to clients across all areas. From contracts to commercials, we give you the flexibility and adaptability in the services we deliver. If your business needs more, we can deliver it, and build it into your contract.